Moore county is located centrally in North Carolina in a region known as the Sandhills. The area has a temperate climate and is known for its relatively mild four seasons.  January is typically the coldest month of the year, seeing average temperatures in the low 30s. This region also has an annual average snowfall of 4 inches. July sees the highest temperatures, averaging around the low 90s. July is also known to be the wettest month of the year, thanks in part the southern afternoon thunderstorms. Moore county averages about 48 inches of rainfall a year.  Due in part to its somewhat coastal location, the area still experiences the effects of weather systems coming in from the Atlantic during hurricane season (June 1st through November 30th). 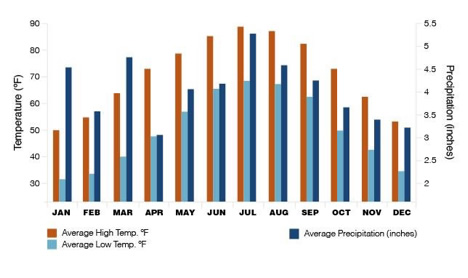