Woodlake began in 1968, by A.B. Hardy, a local developer and landholder when he created an 1,100 acre lake. It was the only private lake in North Carolina and one of the largest in the South. Hardy hired Ellis Maples to design the first 18 hole golf course onsite. It was completed in 1970.

Unfortunately, the 25 mile distance from Pinehurst was considered too far to travel at the time and the resort fell into financial trouble. In 1980, Hardy sold the resort to Dr. Ingolf A. Box a German attorney whose wife was a member of the German National Team. In 1990, Box hired Ed Seay, who had worked under Maples up until his death to design a second 18 hole course. Seay went on to join Palmer Design. Box negotiated to have Seay design the course, but Palmer insisted that even if Seay designed it, it would have to carry the Palmer name. This was a pricier venture than Box had planned for at the time, so Ellis’ son Dan Maples was acquired to design the course. He designed the first ten holes, before Box agreed to pay for Seay to finish the course. It is often noted that the back nine and the front nine have split personalities; this explains why there is such a distinct difference. The Palmer course opened in 1996.

Today, Woodlake features the Woodlake Resort and Country Club. Offering two championship golf courses, one designed by Ed Seay and Ellis Maples and the other by Ed Seay, under Arnold Palmer. Woodlake also boasts a 1,200 acre spring water fed lake where residents and their guests can enjoy boating, fishing, swimming and water skiing. There are also pool accommodations and a clubhouse. The historic Oates House, built in 1792, has been restored and expanded into a fine dining restaurant and also acts as the clubhouse. This facility is overlooks the lake and is frequently reserved for events. 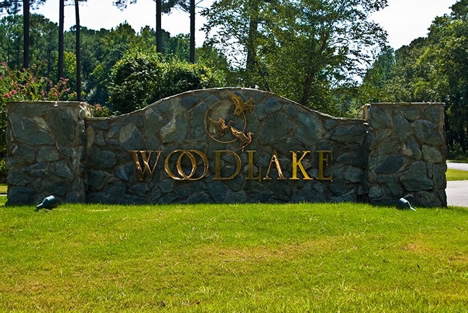