Piney Bottom, now known as Foxfire, was inhabited in the 18th century by the Scots.  They made their living from the pine trees, producing turpentine and later harvesting the pines for construction timbers.  A smaller branch of railroad ran from Aberdeen to Foxfire making the industry more marketable and prosperous.

By the 20th century following the Civil War, the surrounding areas began to develop as resort communities.  With that came a need for agriculture in the area; cotton, tobacco, corn, rye and wheat producing farms became prevalent.  Foxfire phased into vineyards and orchards, producing peaches and scuppernong muscadine grapes.  The peach trees are believed to have covered some 300 acres along either side of Hoffman Road from Richmond Road to today’s Cardinal Drive.  Another 20 acres were devoted to scuppernong muscadine grape vineyards.  On the east side of Hoffman Road was a small tract for tobacco, and cotton, corn and wheat patches scattered elsewhere.

In 1928, a frost devastated the crop and in 1929 the orchard was closed.  The peach trees were all cut down and replaced by longleaf and loblolly pines.  1942 the entire 2150 acre tract was sold to investors from Biscoe that removed the working buildings and felled the entire tract, except the trees planted in 1929.

In 1967, a group of well to do investors purchased the entire tract for $350,000, with visions of building a golf resort plus three quarter to one acre tracts that would be suitable for residential building.  They named their project the Foxfire Development Project.  Their development plan called for an 18 hole golf course, with a clubhouse and supporting facilities including access to an onsite airport, 500 to 600 residential building lots with paved roads and utility services and future development of a hotel and other commercial enterprises. 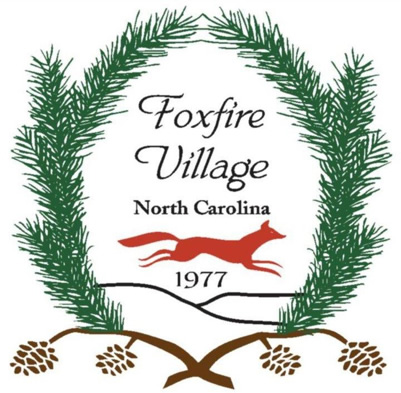 Today Foxfire Village surrounds two 18 hole golf courses and a large equestrian community.  It offers spacious residential lots in a quiet community only two miles outside of the historic Pinehurst Village.  The Foxfire community has grown from 2,100 acres to 5,000 acres.  In 2009, 1,500 acres was acquired from the future development of two Jack Nicklaus designed golf courses, a five-star hotel, conference center and spa, and a variety of residential home sites, condominiums and townhouses. This development project is expected to be complete within ten to fifteen years.